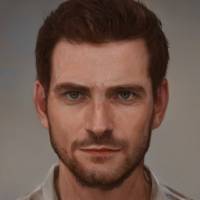 Henry Hayes is a 42 year old combat veteran that served with the Imperium armed services for over 25 years. He's not too bright, but makes an effort to understand anything he needs to. He has a crude sense of humour, but as soon as the fighting starts, he's cool and serious.

Henry Hayes grew up on Tobia (Trojan Reach, 3215), the mixed race son of a middle class Vilani mother and Solomani father, though he considers himself Vilani and knows very little of Solomani culture. He was a bit of a wild child, and wasn't quite ready to grow up when he entered the Military Academy. As such, he flunked out due to excessive drinking and partying.

He still joined the Star Marines though, just not as an officer, something he's come to be thankful for. Despite a brief brush with a criminal enterprise which managed to go unnoticed, he stayed mostly on the straight and narrow and was soon promoted.

He spent several tours in the Outrim Void, and his first real brush with combat was a major campaign against pirates, when his commanding officer was killed early in the fight, and he took charge and led the boarding action which resulted in the capture of an important ship. Again he was promoted, and continued to distinguish himself during hostile boarding actions. He was awarded with a custom fitted combat environment suit with self sealing and chameleon IR, which he still has to this day.

He was eventually rotated back off the front lines, spending a term performing garrison duty and training on Romar (Spinward Marches, 2140), where he picked up naval tactics. He got bored though, and was not paying attention when a sudden surprise attack by over enthusiastic raiders bombed the base. He failed to raise the warnings in time, and several people died, including some of his friends. The commanding naval officer, Commander Ekhagisha Ludadagini, blamed him personally for the deaths, but he was officially acquitted of any wrong doing.

He requested that he return to combat, and was given a final tour of duty along the Sindalian Main, where he got to lead a glorious battledress assault against an orbital pirate base. He received his final promotion of his career to Gunnery Sergeant, and as age was beginning to take its toll he mustered out with an army pension and what savings he had.

He now wants to settle down for a quiet life, using some of his savings to buy his way into a nice neighbourhood on Imisaa and into high society, though there's a high likelihood he will get bored and start looking for something to do.

Another attempt at a military character, taking this one up to his 40s to provide a wide range of experience. He started with a good set of stats, but lost some due to ageing at the end. I kept him on to get to rank 5 so he got the bonus to benefits rolls.