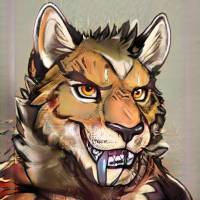 Htoalhfua should have been a typical male Aslan, but things didn't work out that way, and pretty much every attempt he has made to find himself a home or family to call his own has failed. He's pessimistic, always expecting to be disappointed in how things turn out. He is quick to take offence to challenges to his honour, but that's because he feels that's all he has left of being an Aslan, rather than because he values his honour.

Htoalhfua was the second son born into a great clan, though the clan's glory days are long past, having mostly been lost by the time of his grandfather. His father tried to claim territory back, and succeeded to some extent, but the clan is now mostly forgotten.

He entered the military, spending a few years as a ground soldier, but was injured in a battle on some nameless world, one of the few survivors of his regiment. He left the army, joining a pirate crew to gain land on their own terms rather than fighting for another, but was again severely injured when his raiding ship was destroyed, and he survived to become a scavenger.

Even that didn't last long, and he left Aslan space for he Trojan Reach, trying to join a human pirate crew, but instead ended up just drifting from job to job, struggling to make a living. He got into a deadly fight with another Aslan on Imisaa, killing them, and is now hiding out from his own kind, hoping for a human ship to take him further away from his homeland.