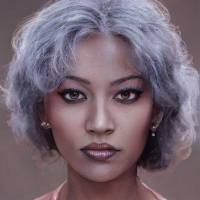 Ishza Irulash is a journalist who covers the darker side of human nature, making holovids on crime, poverty and the lesser known aspects of society.

Ishza went to university to study journalism, never quite expecting where it would take her. She graduated and went into journalism, where she got her first job reporting on gangs in the crowded arcologies of her homeworld of Tobia (Trojan Reach, 3215). It was there that she met her wife, Ashke.

With the success of her first holovid, she was asked to make another and quickly got stereotyped into “the woman who does dangerous and weird stuff”.

She went independent for a bit, making a series on pirate groups in the Reach, and then got sued by another journalist who claimed that she had stolen his ideas. The court case actually raised her profile, even though it cost her some money.

She is now in her late 30s and trying to decide what to do with herself. She has some ideas about stories which could be dangerous, but Ashke is wanting to settle down and have children.

I used the expanded career events table for Ishza from the D66 Compendium 2.

1)
She started with an INT of 4, but fortunately got a +2 bonus from her benefits, which brought her INT more in line with her EDU
2)
I rolled Streetwise as a skill every time, even when I changed tables
traveller/goldenage/characters/ishza_irulash.txt · Last modified: 2021/01/09 21:25 by sam