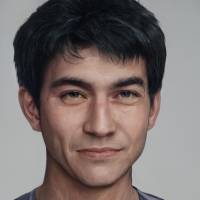 Jacob is an ex-Scout who has seen a lot of alien worlds. He takes the unusual and unexpected in his stride, and has learned to always have an escape route out of any situation. He is rather taciturn and humourless, only speaking when he has something practical to say, but not knowing how to be diplomatic when disagreeing with people.

Jacob grew up on Junction (Trojan Rech, 2804), where he lived on a farm far from the even limited technology of that world. His farm was barely profitable though, and after a harsh winter in which the rest of his family died, he decided to travel to the starport and apply to join the scout service at the age of 24. When asked his name, he just gave “Jacob”, and not realising the concept of a 'family' name, just gave “Jacob” as that as well. So that became his official name.

He was accepted, and was pretty soon in the thick of it. Whilst on a mission in the system of 627-301, his ship was attacked by pirates and he the rest of the crew were captured. He escaped, killing several pirates and stealing a ship to get to safety. The self-styled pirate princess Juuma Iodiishi still blames him for burns she received during the event.

His exploration took him to the spinward edges of the Trojan Reach, where he made first contact with a pre-technology human species. The expedition was botched when he made some basic protocol mistakes, earning him the enmity of Professor Jazooka who had been carefully planning first contact with that species for almost a decade before Jacob blundered into them.

He found himself blackballed from several potential missions after that, and took to spending his time gambling. Eventually he was given a mission out near the Florian League. Thinks went badly again, and he found himself having to hitchhike back to Imperial space, taking the long way around through Dpres and Sindal sub-sectors. He made some friends, and some enemies during that event, but got back alive.

He has since decided that the Scout service isn't for him, and is now looking for independent work.