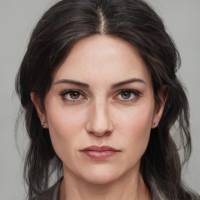 Michelle is a large woman, tall and well muscled. She is also passionate and outspoken, utterly convinced of the obviousness of her cause, and certain that those who argue against her are all part of the conspiracy. She never lets truth or logic get in the way of her beliefs.

Michelle was working in a fast food restaurant on Amondiage (Reft, 2325) when the truth suddenly dawned on her - the entire Imperium was a lie. That humans had populated the galaxy hundreds of thousands of years ago was such an obvious falsehood she couldn't believe that others hadn't seen it. If some so called alien species had taken humans from Earth, then why were there still people on Earth thousands of years later?

She argued with her family, her friends and her co-workers. She was laughed at, but she started to gain a following. Going out into the Islands she hitch-hiked to other worlds to spread the truth. The entire Imperium was a lie put about by the governments to keep people in line. Aliens were also probably just people dressed up in suits. Mostly they just looked like people in cat or dog suits.

She took the opportunity to visit all the worlds of the Islands, refusing to try and leave for Imperium space because she believed doing so would result in her being brainwashed. At some point she realised that there were some minor flaws in her arguments, but by this time she was beginning to get a following so decided to carry on, actually getting support from the government of Topas which found her views useful. This gave her some much needed credibility, but also made her an enemy within the Topas terrorist groups.

Over the last few years, she has made a number of rivals amongst both the scientific and business establishments, a fact she uses as proof that she's on to something. A large conference on New Colchis was particularly successful for her, though she greatly embarrassed several scientists and government members who tried to debate her but were unprepared for the stupidity of her arguments.

Though she has pretty much alienated her family and original circle of friends, she can except to get an audience of hundreds, if not thousands, when she does fund raising events on worlds in the Islands. She is beginning to tire of the circuit, but has a number of donors who pay her a considerable salary to keep going. If she's privately questioning her public beliefs, she's definitely not showing public signs of it.

Her popularity is also beginning to make her enemies from her own side, and others who push the theory that the Imperium is a lie are also attacking her, calling her a shill who is planning to try and discredit the organisation. There has been some violence at her most recent rallies, and her Holovids are beginning to divide the community more than bring it together.

FOL is a measure of the size of a Truther's following. At 11, she is a highly influential Truther, and gets +3 bonus to Persuade and other skills when influencing her followers, but -3 when interacting with those who think she's a crank.

A Truther is a career in the Traveller Companion, and is a somewhat unusual career. They start with a FOL (Following) characteristic of 0, which is a measure of their success.

I wasn't sure where to go with Michelle initially, with her low Education. It was then that I realised that Truther might be a fun career to try. She scraped through on survival rolls, but it's quite hard to get ejected from this 'career'.