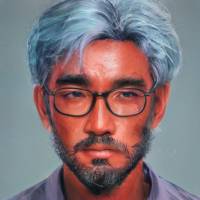 Nigel Nikateema is a tall, frail man with silver hair and beard. He can have an intense look, and can stop a conversation to just stare at a person. He knows that he's famous because of his talent, and he thinks that makes him better than those who socialise with him.

Nigel Nikateema grew up in the Serendup Belt, and like many of those around him was tall, think and weak due to the zero gravity and low gravity conditions. He managed to enter the Merchant Academy, from where he graduated with honours and went on to join the Merchant Marines, becoming a pilot.

Within a few years he was advising on trade deals, especially robotics. He managed to grow quite a successful business, but it all came crashing down when a competitor managed to steal a deal out from under him. He'd invested all of his money at that point, so the loss caused him to go bankrupt.

Out of options, he tried settling on New Colchis for a bit, where he took up a management position at a small company. He was doing well, when the company was bought out and he found himself demoted and out of the bonuses that he'd been promised. So he quit.

Not sure what to do, he took up painting to relieve his stress, and turned out to be quite good at it. Though his style wasn't technically great, it turned out he had an imagination which caught people's attention. What he started as a hobby between careers turned into a life.

He became famous on New Colchis for his paintings of stark city scapes and neon night life. He did some work for the New Colchis Navy, where he did the interior art for their new line of warships.

Now into his fifties, he is famous through the Islands and a frequent invite to high status parties where he often spends the time in the arms of young women. He still hopes that his greatest work is ahead of him, and has no plans to stop, though is finding that time spent under normal gravity is taking a toll on his body.

This is a character which really didn't go the way I expected. What was going to be a trader, ended up being a famous artist. Used the Merchant Academy pre-career from the Traveller Companion, and the event tables from D66 Compendium 2.