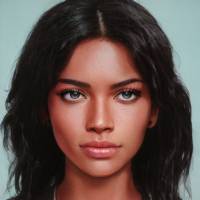 Octavia Odena is a 30 year old woman from Esperanza, an ex-soldier who is looking for work as a mercenary. She is bright, well educated, and physically fit, and is willing to take on the whole galaxy if necessary. She is generally optimistic and outgoing, though doesn't take shit from anyone.

Octavia Odena was raised on Esperanza, and always wanted to be in the army. She was cleverer, stronger and faster than her peers, and fully expected her career in Esperanza's military to be long and distinguished. She could have joined the navy, but wanted to join the army where the 'real' work was done.

She graduated from the military academy, and did a tour of duty, quickly rising to Corporal and as she would say, she learned to love big tanks and big guns. Everything was going fine until a new CO took a disliking to her after she refused her advances. She did everything she could to ensure that Octavia got the worst jobs, and denied her deserved promotion, finding every reason to question her decisions and actions.

When her term was up, Octavia decided that she didn't want to take that shit any more and left. She is now looking for a mercenary group to join, anywhere in the Islands, where she work with people she respects and do what she enjoys most - blowing shit up.

Octavia has a pretty decent set of stats, but ends up dropping out of her career quite young due to some bad rolls.

Just about scrape through in joining and graduation.