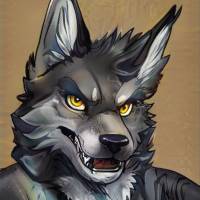 Okhegan is small, even for a Vargr, with a light build and slight patchy fur and walks with a bit of a limp. She has been the runt of her pack since she was born, and is used to it. She expects to be treated badly by everyone she meets, but is determined to survive.

Okhegan was born on Ozngenra (Tuglikki, 3038) as the runt of her pack, smaller and weaker than everyone else she lived off the scraps of others and struggled to make herself useful to those in power, doing anything they wanted. Soon after finding a position serving her pack leader, she was set upon by her rivals and almost killed.

She survived, and slunk away with a scout crew, learning to pilot the ship from watching the others. Before long though, the ship was raided by Corsairs, and the rest of her crew were killed. She pleaded sufficiently though to be allowed to join the Corsairs. After an unfortunate accident befell their pilot, she offered to take up the position and survived in the role for several years, even though she was still treated as the lowest member of the group.

Now she has left the Corsairs behind her, and is stuck in the Trojan Reach with her share of the loot and seeking another pack to join.

Okhegn came close to dying in character generation. Starting with a STR of 3, and getting an immediate -2 to it from being a Vargr. She then suffered an injury, and I reckoned risking too many ageing rolls was probably a bad idea so finished her careers at 34.

This career didn't last long. Decided not to take the medical care because it fitted the character better.

It was the one career that didn't need a CHA check to join.

Tried to get her physical stats up, ended up leaving the career to join the Corsairs.

Again tried to get some physical stats or CHA, instead got Melee. Picking up Gun Combat seemed useful since physical combat really isn't her thing.