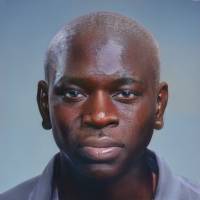 Ronald Reed is a 34 year old man from New Home in the Old Islands sub-sector with dark skin and a bald head. He is normally smartly dressed and has an aura of competence. He works aboard the A2 class Far Trader Electric Blue.

Ronald Reed grew up on the streets of New Home (Reft, 1925), living with his girlfriend Anna Yelstead. They managed to avoid most of the hardships of their neighbours, but eventually fell into a life of crime. Unfortunately, just a few years later, Anna betrayed him on a big job, running off with a sizeable amount of cash and leaving him to be caught by the police.

Given that he'd been left with nothing, he was able to argue that he had only been involved on the sidelines, and gave up her details in exchange for his freedom. Since that time, neither have forgiven even other.

Ronald tried going straight, and managed to get a job working as a steward on a star liner. With a bit more experience and confidence under his belt, he joined with a few colleagues to begin their own company, working on the ship Electric Blue which has been converted to a passenger liner, they ferry people around the Islands in reasonable comfort. He has part ownership of the ship, some savings and a steady job, so his life in his opinion is going well.

Ronald didn't start with a great set of stats, then failed to graduate from his pre-career. Given how low his physical stats were, I didn't want to age him too much.