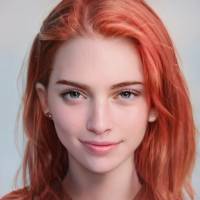 Samzam Shalaja is a 30 year old red headed woman from Imisaa. She is attractive, friendly and outgoing, and tries to see the best side of things. She used to be the lead singer in the band Frantic Reds.

Samzam Shalaja was born on Imisaa, and always wanted to sing in a band. She was pushed into going to university by her parents, but failed to get in which 'forced' her into signing on with a records label and becoming the lead singer in the Frantic Reds after an early borderline pornographic holovid of hers went viral. She also started to make money on the side when she realised that she could use her fame as a distraction for associates of hers to gain access to buildings or people for nefarious purposes,

There was a minor incident early in her career when a fellow singer became famous with a song that had been written for Samzam. She decided not to pursue it in the courts though it potentially lost her a lot of money. She had decided by this point that she had more interest in her side gigs than in the singing, though she did enjoy the fame and having tens of thousands of people watching her dance around on stage almost naked. She's self-aware enough to realise that most people don't follow her for her singing ability. Though the constant jokes about her lack of vocal skills is an irritant, she lets it slides because it's allowed her to have a relatively easy life whilst pulling the wool over everyone's eyes about what she's really doing.

After winning an award for the most scandalous artist of Tobia, she has decided to leave the Frantic Reds and is going solo, planning a tour of the Tobia sub-sector sometime soon. She keeps on saying each tour will be the last, but there's always another interesting place to play at and a gang of criminals or con artists looking to take advantage of a big distraction in order to make it all that much more exciting.

She originally failed to get into university so went straight into Entertainment. Despite being there for three terms, she failed to pick up any Art skills but did pick up a couple of levels of Streetwise.