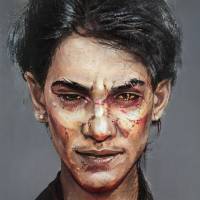 Valkentana Vidar has the appearance of a homeless bum, possibly somewhere in his late 40s. His face is scarred, and his clothes tattered, and he is missing his left arm below the elbow.

Valkentana Vidar was the son of a rich family on Berengaria (Trojan Reach, 2105). He was always a sickly child, who was hoping that he could live off his parent's success. Unfortunately their luck ran out when they suffered total bankruptcy, forcing him to accept the draft. He joined the Merchant Marines, where he spent most of his time working as a quartermaster and providing supplies to the blackmarket.

Unfortunately, he was caught and whilst trying to make a hasty exit from the docks managed to crash his car, severely injuring his arm. Escaping the crash, he couldn't go to a hospital since doing so would end up with him being identified and arrested, so he went to a back street clinic where it was amputated.

He can't remember much of the following few years, but he drifted from plan to place until he found himself outside of Imperial space in the Sindal sub-sector without much memory of how or why he got there. It was there he managed to catch a disease that would have killed him on Noricum (Trojan Reach, 2018) if it weren't for some aid provided by Aslan Ihatei.

From there, he managed to hitch-hike back to the Imperium, learning to live between the cracks and avoiding the eye of the authorities, sometimes managing to sponge off rich women looking for someone in need of care, sometimes being stabbed and left for dead in some side street. Unfortunately he didn't avoid the eye of criminal gangs, and managed to anger not just one but two major criminal organisations over the last few years. Both now want him dead for the simple crime of befriending their girlfriends a bit too closely.

When his luck is with him, he still knows how to play the role of a rich member of the nobility. He can put on the right accent, knows the mannerisms and can wear the clothes that give him the appearance of an ill nobleman in need of looking after, which appeals to a certain type of person. However, he needs the money to be able to do this, and doesn't always have that available. At that point he's back on the streets, where his ill health and tendency to be seen as an easy target for mugging often leaves him in a state where he can't play that role.

So Valkentana started off with low characteristics, only SOC was anything special. Then things went downhill from there. He repeatably failed to get into anything, and also failed survival rolls for all but one of his terms.

Failed to get into Noble. Entered the Draft. Tried to get some characteristic bonuses, but failed.

Failed to become a citizen, became a drifter.

Failed to become a citizen.