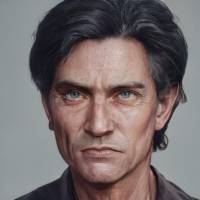 Xander Xenakis looks older than the 46 he actually is. He's frail, with a poor health, finding it hard to exert himself for any length of time. He can be quite abrasive, often talking over and ignoring others and belittling them if they don't agree with him.

Xander Xenakis grew up on Helifil (Reft, 0313), and was quite athletic in his youth, pursuing sports rather than academics. Unfortunately he had an accident with an airlock, which caused lung damage when he suffered explosive decompression and inhaled dust from the outside which left him with heavily scarred lungs.

He tried to get into the Naval Academy at Berg (Trojan Reach, 3212), but was rejected due to his poor health and lack of academic qualifications, so he got a job there working as a low level office clerk for Ling Standard Products.

Due to his brash personality, he quickly made enemies with his co-workers, but his boss noticed his outspokenness and mistook it for competence, promoting him. He gradually climbed the ranks over the following years, making more enemies but managing to portray an aura of competence to those above it, always blaming his coworkers or team members for his failures. His inability to make real friends pushed him into gambling, and introduced him to the seamier side of society. Xander used this to his advantage at times, getting dirt on coworkers and rivals in order to push his agenda within the company.

Eventually his failings caught up with him, and when there was a round of restructuring he found himself first on the list to go. However, he was even able to turn this to his advantage, grabbing a Director level job at Tobia (Trojan Reach, 3215).

However, the atmosphere there wasn't to his liking, and his lungs were by now really causing him problems. So he decided to resign and take a generous package, looking to retire to some smaller world with a decent atmosphere where his body would find it more comfortable.

Xander is not sure what he wants to do with the rest of his life. He is a psycopath, only viewing others as tools to use to get what he wants. He's not good at hiding though, so has been unable to forge long term relationships, driving away anyone who might be willing to be a friend. This drives the cycle, making him more willing to use and abuse people for his own advantage.

Ironically it was whilst leaving LSP that he did meet an HR representative who seemed willing to put up with his personality, but possibly because she was as broken as he was.

He started with some good characteristics, but low END and EDU, which was an interesting combination. University definitely wasn't a route for him, so I tried Military Academy which he also failed at.

After that it was Citizen all the way, and repeatably got the same result (poor co-workers), which suggested the problem was with him not them.

Final career, since by the end of it his END is 1, and any more ageing would kill him. He both loses his job (but is not ejected) and gains a promotion, which was a bit weird, so that was an event for his back story.

With his Gambling skill, taking money seemed like a good option for his benefits.

Also gives him a pension of Cr14K