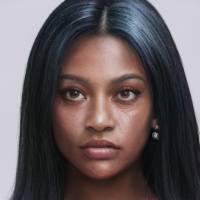 Yasmeen Young is a 38 year old woman. She is tall, strong, has a gruff demeanour and loves getting into fights.

Yasmeen Young grew up in a rough sea-side town on New Colchis (Reft, 1327), where she learned to fish and sail with her father. She was forced to learn to stand up for herself, often getting into fights with larger kids. Not wanting to follow in her parent's footsteps of barely scraping buy in honest working professions, she moved to the city and discovered that her ability to win fights was just as important. Only now it was knives and guns as well as just fists.

She quickly fell in with the gangs, getting a break when she started stealing high powered cars from rich corp brats. She was soon hired on as an enforcer, a job she excelled at. She could smile and be nice, then smash people in the face when they were off guard, a technique she found tended to confuse and scare people.

Eventually she learned that sometimes she could stop at the 'smile and be nice' stage, only needing the threat of smashing them in the face to get them to hand over the money they owed, or otherwise do what she or her bosses wanted her to do.

Other than her car, her favourite memento is a mouse bot she took from an Aslan she had to collect from. She has it programmed to perch on her shoulder on command and hiss at anyone who gets close.

Yasmeen knows lots of people, but there isn't anyone who she considers a close friend. She has a habit of pushing people away if she feels they are getting too close.

With a low starting SOC (3), School of Hard Knocks seemed a likely place to start.