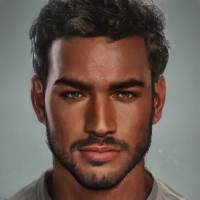 Zachary Zelly is a well dressed man in his late thirties, with dark hair and a short beard. He comes across as friendly and welcoming, as well as slightly dim.

Coming from a rich noble family, Zachary Zelly was able to walk into a job as a diplomat without any questions asked about his lack of ability. Fortunately he wasn't required to do any real work, just act as a face and name and rubber stamp decisions made by the civil service on Albe (Trojan Reach, 2211).

Despite not doing anything, he did manage to pick up some shooting skills on a hunting ranch, and was given a strange alien pet that looked a bit like a 30cm wide spider which he called “Hunter”, since it was good at catching birds.

After almost a decade of this, he began to gradually realise that his position was one of misdirection and deniability, for some of the papers he'd been rubber stamping didn't quite add up. He was slow, but not that slow, and discovered that one of the business ventures he was a partner in was shipping slaves out into the Outrim Void. After several weeks of soul searching, he decided to expose the venture. Though he lost money due to it, he decided he wouldn't be responsible for such things.

From that point on, he started to try and pay more attention to what he was doing, asking questions and actually making decisions. The change in his personality was noted by his underlings, who actually tried to support him in this, and he became to appreciate their help. Unfortunately his family didn't appreciate this, since it had always been assumed that he would just do as he was told.

There was another scandal involving bribes from Black Sky Industries which he could have kept covered up, but instead chose to become the black sheep of the family by exposing it. He was forced to quit his job soon after, but believed that it had been the right thing to do.

He's not sure what he's going to do next, but he has a yacht and knows people, so might try and find a crew to help him make use of his new found appreciate of those not so fortunate as himself.

Another character with high SOC and low mental characteristics. Zachary could qualify automatically for the Noble career, so did. He didn't even bother to try for University or anything else. Just for fun, I went for Diplomat rather than Dilettante, which worked out surprisingly well due to the low survival/advancement checks needed.