Ardasii is a world of white deserts, split between the city folk who dwell in their white stone cities in the service of Ardasii Metals and the uncounted desert nomads who roam the wastes in their search for water and who answer to no-one save the spirits of the sands.

Ardasii has three rocky asteroids as moons, none larger than 40km in diameter.

There is a single F7 star here. The jump mask extends out to about 140Mkm, masking the first four planets.

The system has a large number of planets in close proximity to the star, which is unusual. It is thought that outer planets were lost after a stellar near-miss. There is a distant Oort cloud, which shows very severe signs of disturbance within the last few million years.

There are ships which scoop water from the upper atmosphere of Nemos (IV), though it is a difficult and dangerous process and requires specially modified fuel scoops. The hydrogen is then brought back to Ardasii for sale.

The Imperial naval base is part of the fleet that is controlled from Tobia, and manages patrols along the border in this volume of space.

Ardasii is a desert world with a thin atmosphere. From orbit, it is a world of white sand and rock wrapped in white clouds. Unfortunately, the clouds are dust rather than water.

The official population of Ardasii is about a million, most of them living in the white stone cities that are built into the sides of mountains, atop reservoirs of water which is the civilisations life blood. The population of city dwellers numbers about three quarters of a million, the rest are the nomads who roam the desert wastes. 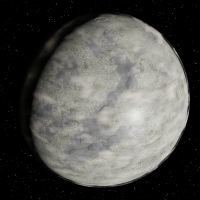 However, some think that the true number of nomads is much higher, possibly into the millions, but their desire to keep apart from the city dwellers and their continuous migration in search of water make it difficult to come up with an accurate number.

The cities are mostly powered by solar energy, which drives a thriving technological society which is almost entirely geared towards extracting every last bit of mineral wealth from the world.

The world is pretty much run by a complex bureaucracy with no single leader. Various factions have control over finances, law enforcement and resources, with input from various non-governmental factious including corporations. Some say that the government is an extension of the middle management of Ardasii Metals, the largest and most powerful of the companies here. It's probably true, but there's nothing officially written down that defines that - just a case of people who know people, or owe people, who can make sure that things get done.

Most of the wealth come from mines across the surface, which dig up metal ores and ship them off world after a minimum level of processing. The starport is pretty much geared towards heavy industry, with a limited set of facilities for tourists and other travellers.

The people of Ardasii are generally poor, either working for the various mining companies or in service or engineering industries supporting them. Buildings tend to be small and dark, with everyone living in close proximity to each other. The city based Ardasiians find this normal, and actually dislike the big open landscapes of the deserts. Families tend to share bedrooms and young adults tend to live in large unisex dormitories, and this has led to a social norm that people do not see or hear things they shouldn't see. Ardasiians like to say that privacy is a state of mind.

This has extended to the fact that they deliberately won't notice anything unusual - such as corruption or even violence going on around them. As much as they can, they will try to avoid noticing anything which doesn't concern them. They are also incredibly social, and don't like being alone. As such, it is very rare to find single adults living alone. Normally they live in the dorms, or share places with several friends.

This has sometimes led to interesting situations within corporations, where employees can start their own projects without the permission of the company and it can take a long time for anyone to officially 'notice' what is happening. There's a reason that Ardasii Metals has branched out into so many different industries.

Due to the dry, warm conditions, clothing tends to be plain and light. Both sexes tend to wear a simple tunic, with fancier clothing being the sign of offworlders or richer members of society. There is a branch of the government which regulates clothing styles by social class, though enforcement is haphazard.

The desert folk are completely different. They greatly dislike the enclosed spaces, preferring the open skies and deserts. They are still sociable, but can cope with being alone. They tend to wear long, loose fitting robes or trousers that cover their skin, since they have to put up with direct sunlight.

Trade is mostly metal ores, though science and technology, especially bio-sciences have been more recent exports.

A Streetwise check could turn up one or more of the following:

One of the desert nomads. In his fifties, generally long robes and has long dark hair. He is polite but firm, tends to take a while to get to the point. Takes hospitality very seriously, and is generous to those he considers trusted.

She is a young woman in her twenties, thin with short dark hair. She is an office administrator, with access to various records and building information.

Mr Kadushgi Shekhukaa is a Senior Civil Servant in charge of Starport Operations, based at the High Port.

He is a typical Ardasii civil servant. Dressed in a plain white tunic, he gives every appearance of being bored and calm, rarely seeing a need to get excited. He probably expects a bribe for whatever it is you want him to do.

She is in her twenties, with blue hair and a cheerful, bubbly personality. Her pale skin denotes her as very clearly not being a local. She works as a scientific researcher at Ardasii Metals.

Works for Ardasii Metals, gets annoyed with some of the things that they get up to. May be willing to be a whistleblower. Can get hold of information on employees relatively easily and without needing to be bribed. Can provide +2 bonus on any hacking attempts against the company systems.