A 5th Edition Ars Magica saga, starting at the Cruentis Petram covenant in Stonehenge, in the year 1221.

The saga begins before the End of the World, and the overarching theme is the rise of darkness and the victory of the Infernal over the Divine. At the start of the saga, it is a pretty standard Mythic Europe setting. Though the players are aware that things are going to change (as a GM, I wanted players to have the chance to generate characters that would fit into the long term saga), they don't know the details and their characters are unaware of the saga's overarching theme.

The campaign was originally recorded on the Midnight Saga Page on Google+. Since the announcement of the closure of G+, it is being moved to here. 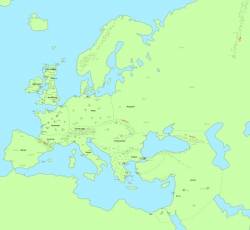 Prior to the Campaign

This details the history of Europe in the run up to the start of the campaign, from a Hermetic perspective.

The chronicles contain a mix of rumours and news from around Mythic Europe, as well as a record of the events that happened to the magi in the campaign. The news was delivered by Redcaps at the end of each season (so the update for Summer 2021, happens after all the events in Summer 2021).

Chronicles are listed by year, and the Redcap updates for the year follow, so chronicles and updates aren't chronological to each other.